Welcome back! Need homework help now that school’s in session? Sign up for our newsletter!

Use this Real-Life Lens Lesson to help students dive deep into Shakespeare’s Macbeth and examine and engage with the play through the lens of power and corruption.

Figurative Language: The Power of Personification

Students will identify the function of personification in Macbeth’s famous “Is this a dagger” soliloquy from William Shakespeare’s Macbeth and explain how and why personification is used to create action in the scene.

Macbeth and the Witches

Students will use two different performances of an important scene in Macbeth to analyze how a director's and an actor's choices can highlight different interpretations of the same text.

Something Wicked This Way Comes

Students will use this worksheet to identify one scene from each act that demonstrates how Macbeth is increasingly corrupted by the promise and wielding of power.

Students will use this worksheet to connect two comparable scenes in Macbeth, developing a writing prompt as if they were the teacher, and then writing a well-developed response to their own prompt.

Heroes and Villains in Macbeth

Students will use this worksheet to list the traits of a hero and a villain, assign these traits to different characters in the play, and then answer questions about who, if anyone, is the hero of Macbeth.

Students will use this worksheet to trace the impact power has on Lady Macbeth by examining each scene in which she appears.

Students will use this worksheet to find various poetic or literary devices in Act 4, scene 1, that Shakespeare uses to characterize the witches.

Students will use this handout to better understand commonly used archaic words and phrases from Shakespeare’s time.

The Language of Power

Students will use this worksheet to categorize various words associated with power used throughout the play.

Students will use this worksheet to better understand a list of terms used in Macbeth by defining the word from context and then confirming with a dictionary.

Power and Superstition in the Elizabethan Era

This handout provides students with important background information about the political power structures in the Elizabethan era as well as the power of belief in supernatural forces held by most people at the time.

In this lesson, students will consider the different ways that directors and actors interpret scenes in a play, as perception and interpretation usually vary with different artists. Few students likely look at a literary text as nuanced or having possible meanings other than those discussed in class, and this lesson will encourage them to recognize the many ways that different people can interpret important texts.

Shakespeare left very few clues regarding how he intended his texts to be interpreted. Most scenes seem straightforward, and when a new director takes on the task of piecing together a Shakespearean drama, most of the key scenes in the play are usually presented in a manner similar to the interpretations made by other directors before him or her. However, sometimes directors and actors make subtle changes to simple aspects of a scene that open a character up to new interpretations or create a nuanced subtext in the scene.

One such instance of the effect of differing interpretations is exemplified in Jon Finch’s and Patrick Stewart’s performances in Act 4, scene 1, of Macbeth.

Get the worksheets for this lesson (plus much more!) in the printed SparkTeach guide for Macbeth.

1. Students will identify and understand the key elements in Act 4, scene 1, of Macbeth.

2. Students will recognize the different ways that Macbeth’s interaction with the witches in Act 4, scene 1, is interpreted by the actors Jon Finch and Patrick Stewart.

4. Students will consider how setting, tone, symbolism, and dramatic expression can be used to create subtle meaning that dramatizes a film.

5. Students will write a well-developed essay characterizing the strategies two directors and two actors use to portray Macbeth’s interaction with the witches.

This activity is designed to be completed after students have read Act 4, scene 1, of Macbeth.

1. Review and discuss Act 4, scene 1, with the class. While doing so, focus on Macbeth’s interaction with the witches. Ask students to consider Macbeth’s demeanor and actions.

2. Have students take notes regarding their interpretation of the scene. Ask: How do you imagine Macbeth behaves when facing the witches? How do you imagine his behavior when he is presented with the prophecies? How might he behave when he sees the final prophecy? Ask volunteers to provide different perspectives. Remind students to consider that Macbeth’s behavior may be interpreted in different ways.

3. Pass out the worksheet Macbeth and the Witches.

4. Show the class the traditional interpretation of the scene presented in Roman Polanski’s film.

5. Have students fill out the first column of the chart on the worksheet, identifying and describing how the devices listed on the worksheet are presented in Polanski’s film.

6. Discuss the scene and details they filled in on the worksheet with the class, focusing on the way that Jon Finch portrays Macbeth’s interaction with the witches. Be sure to discuss who has control in the scene. In this scene, Macbeth is depicted as regal and demanding; he ironically believes that he has power and control over the witches, while it is suggested that they are manipulating him.

8. Have students fill out the second column of the chart on the worksheet, identifying and describing how the devices listed are presented in the film.

9. Discuss the scene and details they filled in on the worksheet with the class. The focus should be on the way that Patrick Stewart portrays Macbeth’s interaction with the witches. One of the key differences between the two scenes corresponds to Macbeth’s attitude. In this scene, Macbeth is presented as nervous and as clearly afraid of the witches, although he tries to cover up his fear. The power dynamic between the two parties is clear: The witches are in control.

10. Have students discuss the differences between the two scenes in small groups, and then discuss as a class.

11. Review the writing prompt on the worksheet and discuss expectations outlined in the rubric: After watching Roman Polanski’s and Rupert Goold’s interpretations of Act 4, scene 1, of Macbeth, analyze how the two depictions of the scene use different strategies to characterize the interaction between Macbeth and the witches. Your response must consider such elements as setting, characterization, camera angles and lighting, symbolism, and dramatic expression.

12. Students will write a well-developed comparative analysis responding to the prompt.

Have students work in pairs to complete the worksheets. Have students choose one or two devices to write about for their comparative essay

Have students watch a third film adaptation of the same scene from Macbeth, such as the 2015 film directed by Justin Kurzel. Then instruct students to include this scene in their comparisons.

Buy the full Teaching Guide for Macbeth by William Shakespeare to get even more resources. 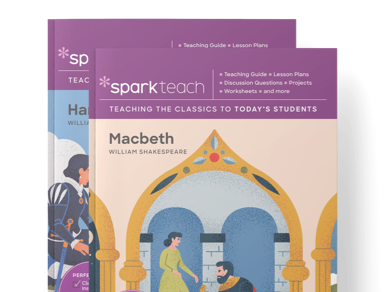