Use this Real-Life Lens Lesson to help students dive deep into To Kill A Mockingbird and examine and engage with the novel through the lens of prejudice.

A Thread of Plot Events

A Quest for Justice and Truth

Students will analyze quotations from the text to determine how justice and truth function in the novel and how they are affected by prejudice.

The Women of Maycomb

Students will complete a chart with details to analyze how women influence the novel's protagonist.

Students will identify synonyms and antonyms of the word prejudice and use them to think about prejudice in the novel.

Walk Around in Someone Else's View

Students will write descriptions of Scout from various characters' points of view. They will use these to determine which character teaches Scout the most about prejudice.

Students will write definitions for twelve words related to the legal system, as they're used in the text.

This handout helps students understand the history of and response to the Jim Crow laws that affect the events of the novel.

Use this Real-Life Lens Lesson to help students dive deep into Harper Lee’s To Kill a Mockingbird and to examine the novel’s themes, actions, and characters through the lens of prejudice. Students will explore various points of view as they speak and write about the novel and its larger themes. They will explore the word prejudice itself, the origins of prejudices, what prejudices dominated the U.S. South in the 1930s, the tragic consequences of prejudice, and various ways to overcome prejudice as a social force.

To activate students’ thinking, choose one or two of the following Real-Life Links to use in an engagement activity. Have students read or listen and discuss the content. Encourage students to jot down notes, or record class notes on the board for future reference.

How Kids Learn about Race, Stereotypes, and Prejudice

This 2016 article and video from Wisconsin Public Television explains how even very young children form ideas about race during the early stages of their development.

The Impact of Prejudice on Society

This Daily Collegian article and video explore how prejudice not only hurts victims—it also hurts perpetrators in subtle yet damaging ways.

This one-hour NPR podcast explores the effects of everyday and systemic racism in America—and how individuals can work to defeat it.

This Science News for Students article about hate incidents aimed at young people in the United States explores how merely learning about such incidents can produce negative physiological impacts.

Pose the Following Big Idea Questions to the Class:

How do people develop prejudices?

What effects can prejudices cause in communities?

How can prejudices be overcome?

1. Have students write quick initial answers to the questions.

2. Discuss the questions, either as a class or in small groups. Prompt students to see that prejudices produce effects that ripple throughout communities. Prejudices can lead to conflict and persecution, or they can be overcome and lead to greater enlightenment, diversity, and inclusion.

3. Following discussion, give students time to revise initial responses and ask volunteers to share their revisions with the class.

Begin by having students write their own questions about the lesson topic. Encourage them to think about what they already know about prejudice and what it can do as well as what they are interested in exploring further.

Hand out the Driving Questions Worksheet. Review the questions as a class. Students should enter initial answers to the questions before and as they read To Kill a Mockingbird. They will revisit the questions and revise their answers following the lesson activities, classroom discussion, and the completion of the text. Remind students to support their responses with text evidence.

Integrate the Driving Questions into your classroom discussions. Use them to help guide students’ thinking about the Big Idea Questions.

1. How and why do the children’s attitudes toward Boo Radley change over the course of the novel?

2. When does a character “climb into [another character’s] skin and walk around in it?” What does this mean?

3. How does the ability to read and the act of reading reveal, limit, or otherwise influence various characters in the book?

4. How is what happens with Mrs. Dubose in Chapter 11 relevant to the concept of prejudice?

5. Who is the most tragic victim of prejudice in the novel? Why?

6. What does the title of the book mean?

7. Which characters overcome prejudice? How do they do it?

Introduce the "Through the Lens" Activity

Activity: The Meaning of Prejudice

Invite students to think about the word prejudice and the language that sustains, sparks, and addresses it. You may need to address pejorative words that have resulted in the novel being banned in some states.

On the board, create a group word web with prejudice in the center. Record definitions, related words, and common images and associations provided by the class. Don’t rule anything out. Push students to consider race, gender, class, religion, geography, language, chromosomes, health, even clothing—all kinds of prejudices.

As a group, settle on a working definition to use for the purposes of this work (i.e., “a preconceived opinion not based on facts or reason”). Make sure students know that this definition is not set in stone.

Invite students to share examples of times when they have seen or heard someone make a generalization about an entire group of people that lacks specific evidence. Ask: Where does this behavior come from?

Begin the word web activity by filling in some examples yourself to give students a starting point. Share examples of prejudice you have seen instead of asking students to generate them.

Share the song and lyrics to “You’ve Got to Be Carefully Taught” from the musical South Pacific (1958). Give the timeline: 1930s for the setting of To Kill a Mockingbird, 1958 for this musical, 1960 when To Kill a Mockingbird was published. Ask: How have ideas about prejudice evolved through U.S. history?

Before moving on, introduce the final projects to the class (see below for details). Have students choose the project they will complete and encourage them to keep their project in mind as they read the text. Facilitate the formation of project groups if necessary.

Students will determine and discuss the various groups or clusters of people who live in Maycomb. Students will:

- name and describe the groups, including characters who are in each group and what the members of the group have in common.

- create visual representations of the town and its social parts, which may be maps, diagrams, illustrations, or charts.

- discuss what the various groups think of each other and how these attitudes sit in the base of the various prejudices within the community.

Help students design a graphic organizer to fill in with the various groups, such as the First Purchase congregation, the Radleys, the Ewells, and the progressive whites.

Challenge students to develop visuals that show interconnected webs of people with the purpose of illustrating the complexity of the relationships in a community such as Maycomb.

Hand out the Atticus: Antithesis and Antidote Worksheet. Explain that students will first use the chart to analyze Atticus as a father, lawyer, citizen, and friend. Then they will consider the larger role that he plays and represents in the novel. They can return to their work after they finish the novel to see if and how he changes or deepens in Part Two. Students will:

- write about and/or discuss Atticus as a character, including his history, what he looks like, what he says, what he does, and what other characters think or say about him.

- draw generalizations about his role as both antithesis and antidote to prejudice.

- predict what Atticus might do in Part Two of the novel based on their observations in Part One.

Choose one or two anecdotes about Atticus, such as his conversation with Uncle Jack in Chapter 9 or the killing of the mad dog in Chapter 10, for students to focus on as they think about Atticus as a character.

Invite students to write a letter to Dill from Scout’s point of view in which she describes how her father responded to an overt act of prejudice in a specific scene.

Students will work on their final projects after they have finished reading the complete text of To Kill a Mockingbird. Project 1 involves viewing the award-winning 1962 film starring Gregory Peck. Project 2 is a writing project. Either project can be done individually or in pairs.

Final Project 1: Compare and Contrast the Novel and the Film

Students will view the 1962 film directed by Robert Mulligan and analyze the similarities and differences in terms of their relevance to the idea of prejudice. Students will:

- analyze through discussion how these decisions by the screenwriter and director influence the theme of prejudice. By shifting the focus to Atticus and away from Scout, how does the film shift from a personal/bildungsroman focus to a social/political/legal one?

- write an essay drawing on the discussion and analyzing how the decisions by the filmmakers influence the theme of prejudice in To Kill a Mockingbird.

Ask: How is the film more about prejudice and justice and less about growing up female in a town like Maycomb? Have a class discussion about the question.

Introduce students to the Broadway version of Lee’s story, starring Jeff Daniels, which shifts even more toward Atticus and also focuses on Calpurnia and her point of view. They will be able to read reviews and view stills from the play online.

Based on the events and perspectives in the novel, students will write two editorials for the Maycomb Tribune about what happened at the trial from two different points of view. One editorial is from a prejudiced and closed-minded perspective, the other from an enlightened and openminded one. Students will:

- articulate what the main idea of each editorial will be.

- choose the details of the novel that best support each point of view and main idea.

- give each editorial a three- to five-word title to grab readers’ attention and clarify the argument.

- deliver a dramatic reading of one of their editorials.

Instead of writing, invite pairs of students to role-play the two opposing points of view in a conversation that happens at a general store.

Add a third point of view and editorial to the assignment: that of the Cunningham who served on the jury and represents, for Atticus, the future of the culture in terms of its attitudes toward racial prejudice.

Use the Rubric for Student Assessment to evaluate student work on the lesson assignments.

Distribute the Student Reflection Worksheet. Guide students through the self-assessment and reflection questions.

SparkTeach: To Kill a Mockingbird

Buy the full Teaching Guide for To Kill a Mockingbird by Harper Lee to get even more resources. 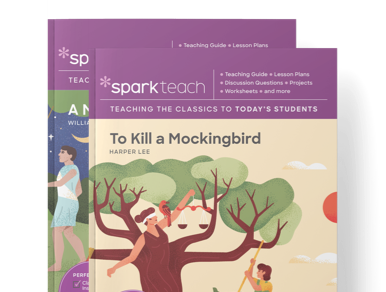