In this lesson, students will consider the different ways that directors and actors interpret the same scene in a play. Perception and interpretation can sometimes vary with different directors. Few students likely look at a literary text as nuanced or having possible meanings other than those discussed in class. Even as an educator, it can be easy to adopt a single interpretation of a scene or interaction in a literary work without considering that the scene may be viewed slightly differently by another person.

Shakespeare left very few clues regarding how he intended his texts to be interpreted. Most scenes seem straightforward, and when a new director takes on the task of piecing together a Shakespearean drama, most of the key scenes in the play are usually presented in a manner that is similar to those who have interpreted the performance before them. However, sometimes directors and actors make subtle changes to simple aspects of a scene that open a character up to new interpretations or create a nuanced subtext in the scene.

For this assignment, students will consider how two different directors and actors interpret Hamlet’s famous soliloquy. Using a graphic organizer, students will categorize various elements for comparison and then use the information to write a response to a prompt about the contrasting approaches to this famous scene.

1. Students will identify and understand the key elements in Hamlet’s “To be, or not to be” soliloquy from Act 3, scene 1, of Hamlet.

4. Students will consider how setting, symbolism, and dramatic expression can be used to create subtle meaning that dramatizes a film.

This activity is designed to be completed after students have finished reading Hamlet by William Shakespeare.

1. Review and discuss Act 3, scene 1, as a class. While reviewing, focus on how Hamlet’s “To be, or not to be” soliloquy reveals his inner conflict. Ask students to consider Hamlet’s demeanor and actions as depicted in the text.

2. Have students take notes regarding their interpretation of the scene. Guide them with questions such as the following: What do you imagine Hamlet is doing in this scene? Where do you imagine this scene taking place?

4. Show the class the more traditional interpretation of the scene as presented in Kenneth Branagh’s film. Have them fill out the second column of the worksheet, identifying and describing how the devices listed are presented in the film.

6. Now watch Almereyda’s version of the same scene. Have students fill out the third column of their worksheets, identifying and describing how the devices listed are presented in the film. Be sure to note that in this film, Ethan Hawke plays Hamlet.

7. As a class, discuss the scene and details students noted. Again, the focus should be on the ways the directors and actors use different strategies to convey Hamlet’s inner conflict.

8. Have small groups discuss the differences between the two films. Encourage students to take notes to use later when they write their essays.

9. Review the writing prompt on the worksheet and discuss the elements required in each essay.

10. Have students write a well-developed essay responding to the prompt.

Have students work in pairs to complete the worksheets. Have students choose one or two devices to write about for their comparative essay.

Have students watch another film adaptation of the same scene from Hamlet, such as the 2015 stage production directed by Robin Lough or Franco Zeffirelli’s Hamlet (1990). Then instruct students to include this scene in their comparisons. 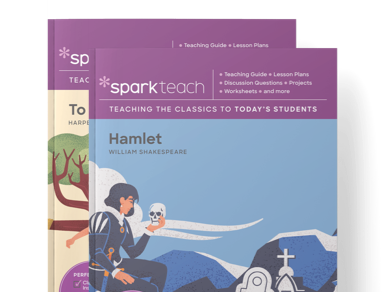