Use this Real-Life Lens Lesson to help students dive deep into The Great Gatsby and examine and engage with the novel through the lens of the American Dream.

Students will explore the theme of marriage in the novel by charting the progression of two marriges to help them draw conclusions.

Nick as the Narrator

Students will examine multiple characters from Nick's point of view to determine whether Nick can be considered a reliable narrator.

Whom Does Daisy Love?

Students will make inferences based on evidence from the text to determine whom Daisy truly loves: Gatsby, Tom, or neither of them.

Students will examine the events of the novel in the order in which Nick hears about them and then create a timeline putting the events in chronological order.

What Words Tell Us About Characters

This handout gives examples of precise but difficult vocabulary that Fitzgerald uses to describe characters.

The American Economy in the 1920s

This handout helps students understand the era in which the novel is set. It gives information on the WWI economic boom, Prohibition, the rise of consumerism, and, eventually, the stock market crash of 1929.

To activate students’ thinking, choose one or two of the following Real-Life Links to use in an engagement activity. Have students read or watch and discuss the content. Encourage students to jot down notes, or record class notes on the board for future reference.

What Is the American Dream? The History That Made It Possible

This article from The Balance defines the American Dream, explains the origin of the phrase, and
describes the conditions that originally made this dream the ultimate goal for Americans.

The Transformation of the “American Dream”

In this article from The New York Times, the author explains what the American Dream means today as opposed to what it meant when the term was first coined, as well as how the promise of the American Dream drives our economy and government policy.

This essay from Psychology Today describes how the desire for wealth and material goods can be as dangerous as any other addiction.

In this video from The New York Times, New Yorkers talk about what the American Dream means to them in the aftermath of the 2008 financial crisis.

Pleasantville (A Short Scene From the Movie)

In the movie Pleasantville, two teenagers in the 1990s wake up to find themselves in the seemingly ideal black-and-white town of Pleasantville in the 1950s. However, they soon realize that what we tend to think of as perfection does not always lead to happiness.

Pose the following Big Idea Questions to the class:

What does it mean to achieve the American Dream?

How has the promise of the American Dream shaped the world today?

1. Have students write quick initial answers to the questions.

2. Discuss the questions either as a class or in small groups. Prompt students to discuss
whether achieving the American Dream means having security and the basic needs in life
or having as much wealth as possible, as depicted in The Great Gatsby.

3. Encourage students to discuss how the idea of the American Dream has changed since the
1920s as well as how this concept may have stayed the same.

4. Following discussion, give students time to revise their initial responses and ask volunteers
to share what they wrote with the class.

Begin by having students write their own questions about the lesson topic. Encourage them to think about what they already know about the American Dream and what they’re interested in exploring further.

Hand out the Driving Questions worksheet. Review the questions as a class. Students should enter initial answers to the questions as they read The Great Gatsby. They will revisit the questions and revise their answers following the lesson activities, classroom discussion, and the completion of the text. Remind students to support their responses with text evidence.

Integrate the Driving Questions into your classroom discussions. Use them to help guide students’ thinking about the Big Idea Questions.

1. What does the American Dream mean to each character in the novel?

2. How do various characters in the novel try to achieve the American Dream?

3. How is Gatsby’s love for Daisy a metaphor for the American Dream?

4. How has the country changed since the days of Gatsby and Nick?

5. What is each character’s motivation for achieving the American Dream?

6. Has Gatsby achieved the American Dream before the end of the novel?

7. How is the green light on Daisy’s dock relevant to the American Dream?

Introduce The “Through The Lens” Activity

In this activity, ask students to write a few paragraphs about a time they wanted something that they couldn’t have. (If students are uncomfortable writing about their own experiences, have them write about someone they know or about a character in a story or film.) Provide examples to provoke students’ thinking, such as not being cast in a play, not making it onto a team, or not going somewhere far away that they wanted to visit. In their paragraphs, students should explain what it was they wanted or wanted to do, why they couldn’t have it, and how the experience made them feel.

Pair students and have partners share their paragraphs. Encourage pairs to return to the Big Idea Questions and consider if and how their personal experiences informed their initial answers.

Invite three or four students to share their paragraphs with the class. Prompt whole-class discussion with questions such as: How do you react to not getting what you want? Do you keep trying or make peace with your situation? How do your initial expectations affect your feelings when you do not get something you want?

Instead of writing about personal experiences, have students write a short essay about what might happen to people who consistently do not get what they want. Ask two or three students to read their essays to the class and proceed with discussion as outlined above.

Before moving on, introduce the final projects to the class (see below for details). Have students choose the project they will complete and encourage them to keep their project in mind as they read the text. Facilitate the formation of project groups if necessary.

- share their answers with the class and discuss with each other which characters most exemplify the theme of greed.

Choose one main character from the novel and ask students if they think that character exhibits signs of greed. Proceed with discussion as outlined above.

Have students select two characters from the worksheet who they think are greedy and write an essay comparing and contrasting what motivates their greed.

Students will think about the events of the novel thus far from the perspective of a character other than Nick. Students will:

- choose one of the main characters in the novel who is not Nick.

- pick a main event that has occurred in the novel so far. Write about that event from the point of view of their chosen character.

- have a whole-class discussion about how looking at the story from a different perspective affects how they think about the characters, including Nick.

Ask students about one character who is not Nick and have them discuss how they think that character feels about a specific event in the novel. Proceed with discussion as outlined above.

Have students choose one major event that has occurred in the novel so far and write about the event from the perspective of three characters who are not Nick. Have pairs discuss what the different perspectives tell them about the characters.

Encourage students to read passages from contemporary works that similarly feature the theme
of the American Dream. In pairing multiple texts with similar themes, students are challenged to look beyond the book they’re studying and find new ways to connect to the themes. Here are some books you can pair with The Great Gatsby:

- We Were Liars by E. Lockhart
- Between the World and Me by Ta-Nehisi Coates
- Behold the Dreamers by Imbolo Mbue

Students will first debate whether Gatsby actually achieved the American Dream and then use the evidence provided by both sides of the debate to write a persuasive essay. For the debate, organize students into small groups. Students will:

- take a position of “yes” or “no” on whether Gatsby achieved the American Dream.

- work together to develop their argument, being sure to include supporting text evidence from the novel and background information from the companion resources presented at the beginning of the Lens Lesson.

- produce a rebuttal against the counterclaim.

- debate a group that has the opposite position. Students not debating can take notes on ideas for their persuasive essay.

After the debate, students will use the evidence gathered to write a persuasive essay that proves whether or not Gatsby achieved the American Dream.

Rather than a formal debate, students can have a group discussion about whether Gatsby achieved the American Dream.

Have students work individually rather than in groups and debate one other student with an opposing position.

Final Project 2: Gatsby as a Metaphor

Students will work individually to write an essay explaining how Gatsby’s arc is similar to that of the American economy in the 1920s. Students will:

- review the text and note the key events in Gatsby’s life as well as what brought him to each event.

- research the U.S. economy in the 1920s, including the events that led up to the Great Depression.

- write an essay explaining how Gatsby is a metaphor for the rise and fall of the American Dream in the 1920s, including how his death symbolizes the Great Depression.

Students can list ways in which Gatsby’s life symbolizes the American economy.

Have students develop two timelines, one showing the events leading up to the Great Depression and one showing the major events of Gatsby’s life, to accompany their essays.

Use the Rubric for Student Assessment to evaluate student work on the lesson assignments.

Distribute the Student Reflection Worksheet. Guide students through the self-assessment and reflection questions.

Buy the full Teaching Guide for The Great Gatsby by F. Scott Fitzgerald to get even more resources. 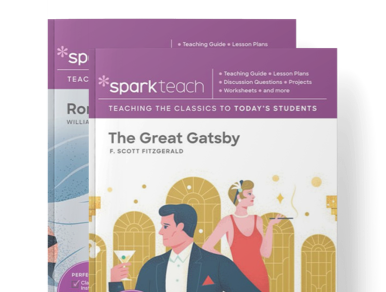